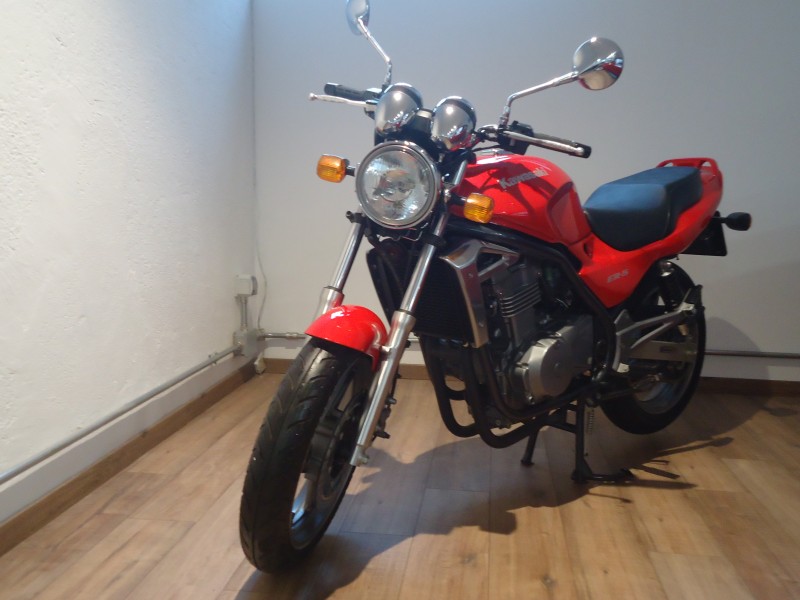 Piis unique ¹ that rare, Kawasaki ER-5 to Km zero! I crossed only 2,6 km for the testing of preconsegna. Emptied by the liquid, without battery and filed in private collection. Good exposure object or with a simple cutting of normal administration + the periodic revsione (what obviously not is ¨ ever performs), puis² to be put again in the street. The Kawasaki ER-5 is ¨ iscrivibile F.M.I. It has a motor bicilindrico DOHC from 498 ccs. based on the project used in the Kawasaki GPZ 500 Ss and in the KLE, in degree to develop, in this first version, around 51 CVs or 37 KW of power (10 in less than her sporting GPZ500s but endowed with piis ¹ couple to the low regimes). The velocitis  maximum is ¨ of around 180 km / h, with an acceleration from 0 to 100 km / h in less than 5".
is. one among the motorbikes favored from the schools drive in Europe for his costs of maintenance relatively lower part and perchis considered © generally piis simple ¹ for the beginners.
The motor derives from what has equipped the motorbike in the eighties custom LTD 450 and piis ¹ recently the sporting GPZ500S
Tests give on road effected by the magazines of the sector it results that on the ER-5 it feels him to really ease since the first meters, the motor is ¨ always ready since the turns piis low ¹, the session is comforting ¨ and it guarantees a good mastery of the vehicle. The tires from 110 to the anterior one and from 130 to the back one guarantee a good agilitis , even if who is ¨ gotten used to the rubbers by 160 or 180 him sentiris  almost & quot;tirato giis¹" once in curve. The department suspensions introduces a classical telescopic fork to traditional stems from 37 mm that result comfortable for the tourist use, some soft when him dis  gas or in you brake her of emergency, the double back damper always results to the height of the situation and regulating the precarico of it he succeeds in suiting him/it for all her situations of guide. The brakes are to disk on the anterior one and to drum on the back. You Kawasaki ER-5 is ¨ confirmed European 2 and it weighs around 180 Kg.