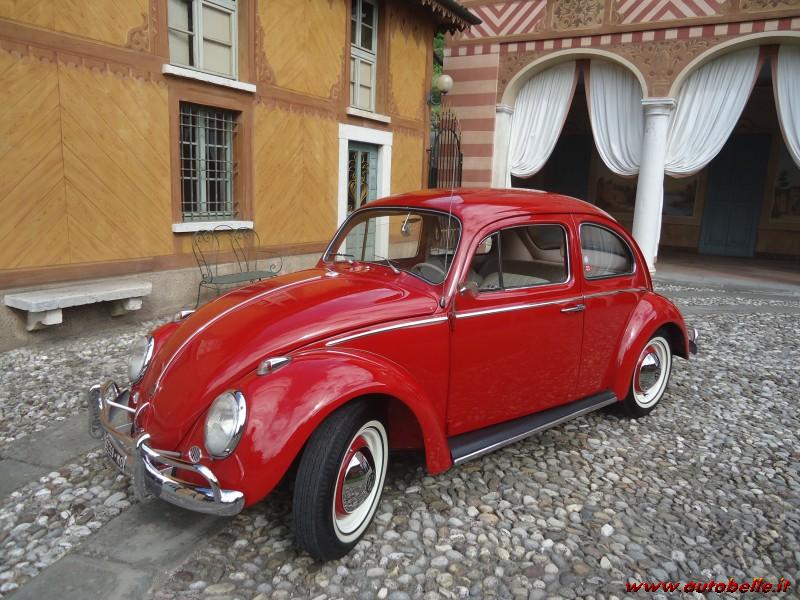 & quot;Presentare the Volkswagen Ã ¨ perhaps useless, perchÃ © the majority of the Italian motorists knows of it the characteristic outline. .. The VW Ã ¨ the car foreign piÃ ¹ spread in Italy. In the year in progress (1961), our Service Studies and Experiences it has effected a test on the new model both perchÃ © it Ã ¨ notably improved in comparison to that of 1956, both for the vast interest that the VW you/he/she has assumed in the meantime on our market, being sold in Italy to today 300.000 liras less than the price of five years ago.
The Volkswagen type 1961 differ from the motorcar that for so many years Ã ¨ with unchanged characteristics is maintained for a great power of the motor, brought by 30 CVs (DIN) to 34 CVs (DIN). Other changes: New reservoir fuel with amplification vain baggages, synchronizer also on the first march, antiripetitore of the starting on the key notepad, adoption of the starter automatico".
From Anthology of Quattroruote 1962.
They are 5053 the Typs 11 sold in Italy in 1961, the double one of the sold ones in 1960. They will quadruple in 1962!
With these premises it begins the history of ours & quot;Maggiolino" MY 1961 orderly in the March of 1961 from an Alderman of the Commune of Formigine (MO). Modena earth of motors and sporting cars what the Ferraris. SarÃ  perhaps for this desire of immedesimarsi in this world, that the car Ruby Red (L456) was ordered. The car was produced in May 1961 and registered to the beginnings of June. The historical coincidence wants, that in the same days in which the TYP 11 Ruby Red was registered, to Maranello you/they were registered of the important Ferraris as a 250 SWB and subsequently a 250 GT I spice. our 113 Export with tall and low of use, it stays in family up to the second metÃ  of the years '90, when it moves him to Tuscany, where you/he/she is used without particular cares, always with his/her periodic revision, but without the passion what you/he/she would have deserved. You photo of the recovery from the President of the Club Volkswagen Italy Ã ¨ symbolic of the conditions of missed care in which the mean, &Quot;particolare", for the year, the plates and the Italian documents of before registration it would have instead deserved. It came therefore valued a job of complete restauration, documented from photos of the various phases, where exchanges have been used only original Volkswagen of the epoch. Lately him Ã ¨ also appraised the remaking of the insides what time him introduced in their particular manner (for the year) in the maximum shine. You car Ã ¨ been endowed with various accessories of the epoch that can do today to smile, but that then they were that something in piÃ ¹ that distinguished one car from another. The restauration Ã ¨ completes with motor referred to new and relative homologation ASI Targa Gold. Present also the Certificate of the AutoMuseum Volkswagen. Of the 5053 samples sold in Italy, in 1961, < span style='mso-spacerun:yes'>  few those remained, still less those with the original plates, still less, less those with the original documents. Difficult then her reperibilitÃ  of the original exchanges branded to the epoch. We are able insofar to affirm that the vehicle proposed Ã ¨ therefore only in his/her kind and If the Super magazine VW Magazine nÂ° 269 have devoted you 6 pages with call in cover, the car has won three Contests International, the qualitÃ  and raritÃ  some object is unique and irripetibile. Obviously such particolaritÃ  they have a cost that if her him He/she wants they go recognized.