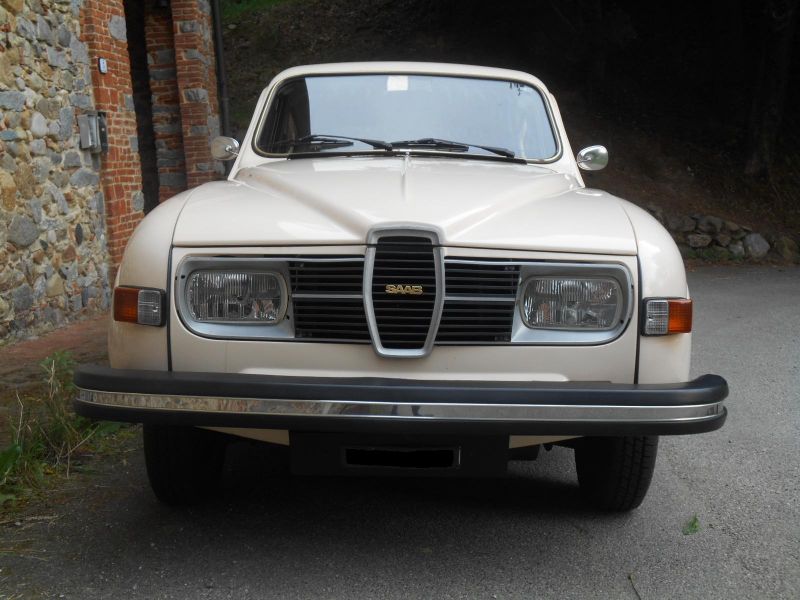 This SAAB 96 V4 L (Luxury) was sold by the official Saab Italia dealer in Milan on October 4, 1976, and for forty-six years it remained firm and kept by the same owner and family, and then passed to a well-known dealer in the last few years. Saab (showroom in the company showroom), passed in 2019 as a collector. Flagship and innovative car of the Swedish House, a "status symbol" of the time, which was guarded and held with great love and care by the family first and by the Dealer after. This explains the very low mileage carried out by the car and its impeccable state of preservation! It has all the documentation from its origin: its original vehicle registration document; his use and maintenance manual; his service booklet (coupons) with all official coupons always performed in the official Saab network. Keys and double keys; Preserves and still maintains its original plates MI ...; etc. ... Its original body color is "W0214" see origin plate in the engine compartment lid. The interiors, door panels and seats are made of a perfect, luxurious, date-blend leather fabric, made of fine, austere and indestructible material. It is also equipped with original mats and has all the original tool kit with a spare wheel. The dashboard is without cracks, in excellent condition also the instrumentation in addition to the steering wheel. Vehicle no smoker! (never smoked in all these years!). The engine compartment is impeccable and is equipped with its original engine with km. 51,164 routes, original! All coupons, strictly by the Saab Dealer for the entire life of the car. 4-speed manual gearbox on the steering wheel. Just made a coupon including: oil changes, filters, spark plugs, fuel pump, brake bleeding, etc. ... This version is the updated version (since 1974), has a new grille and new front and rear bumpers in black and gray plastic, renewed interiors with softer fabrics, standard radial tires and front safety belts with reel and sensor for check the coupling. The following year these were also adopted behind. Also in 1976 the 96 was adapted to the new Swedish anti-pollution regulations. It also adopted a new, less bulky rear seat, the heated rear window and new bumpers the same as those of the 99. The following year several other details of the 99 were mounted on the car. This Saab 96 V4 L is in superlative condition, a very interesting opportunity to buy a unique 70s cool Saab! It should be noted that this "Saab 96 V4 L" is a perfect preservation! This Saab is very rare! I challenge you to find another, preserved until today, with just a few kilometers, in these conditions! Very reliable car for everyday use, extraordinary! The inexpensive! The SAAB 96 V4 L has had an important competitive past in sports competitions! The suspension layout, the trim, the more powerful engine, the chassis and the rack-and-pinion steering made it very competitive in rallies driven by numerous steering wheel axles like Stig Blomqvist and Per Eklund. At the world rally championship in 1971 (the same year as our Saab) the Saab 96 V4 won two victories and the title of vice-champion in the international constructors championship. Its proposed sale price is demanding and consistent with the extraordinary (conservation) conditions of the car! Price on request, demanding and consistent with the extraordinary condition of the car.

The Saab 96 V4 is a car produced by Saab between 1967 and 1980. It is the second version of the Saab 96. It has had an important rally history. The car was born in 1967 as a version intended to replace the old 2-stroke 96, which has become obsolete in terms of performance and consumption. The first version adopted a 1.5l V4 engine of Ford origin from 65 bhp at 4700 rpm. and was able to cover 0-100 Km / h in 16s. It kept the whole car body of the 2-stroke version with all the improvements made that year including front disc brakes and new interior fabrics. The suspension layout, the trim, the more powerful engine, the chassis and the rack-and-pinion steering made it very competitive in rallies driven by numerous steering wheel axles like Stig Blomqvist and Per Eklund. In 1968, thanks to the renewed 96 Saab sales increased by 41.5% in Sweden and 10% worldwide. During the process of continuous evolution of the 96 the safety was increased with a stratified windscreen. In the same year the DeLuxe version was launched with reversing lights, double chrome-plated profiles on the sides, chrome wheel cups and compass-opening rear windows. In 1969 the front was updated with a new grille with the new Saab logo and rectangular, halogen lights on request. On the security front debuted the column d