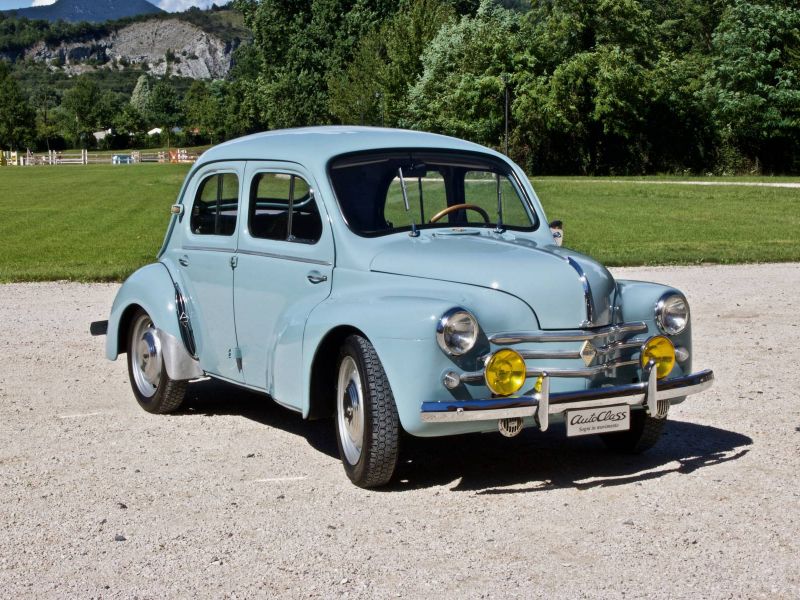 You 4CV were conceived during her/it Second world war, in absolute secretiveness,
gives the extremely difficult period and since the new compact car he/she took I stylistically sprout from the Kis¤fer,
or rather the newborn German May-bug. The public was captured by this small car that introduced
the practice solution of the four doors, a raritis , to the epoch, for a car of this band of market.
The characteristic technical piis evident ¹ was instead the motor, systematized in back position.
The official production cominciis² August 12 th 1947 and the French House incontris² of the difficoltis&nbsps; in to escape the orders,
because of their exorbitant number and the times of attended they lengthened until to one year.In 1952, there were some changes to the range:
the Normal version was replaced by the 4CV Affaire, while the Luxe was replaced by the 4CV Sport.
The following year debuttis² also the 4CV piis ¹ spartana, the Service. Always in the 1953, the 4CV also disembarks in Japan,
where you/he/she is produced on license. In the following years, the 4CV was object of technical updatings of detail,
thin to reach July 6 th 1961, gives in which the last 4CV go out of her lines of assemblage of the Renault.
In the years to come, the 4CV was produced on license in some Countries in street of development,
among which Mexico and Romania (beginning from 1966) and him arrivis² straight to 1983,
year when the 4CV was produced on license in Vietnam, up to 1989.

This stupendous sample is ¨ been born in 1957 in pastel Azzuro with inside in grey fabric.

Recently is ¨ object of a complete restauration that has brought him to to make beautiful show of if to the museum Millemiglia of Brescia and it maintains plates and book original.