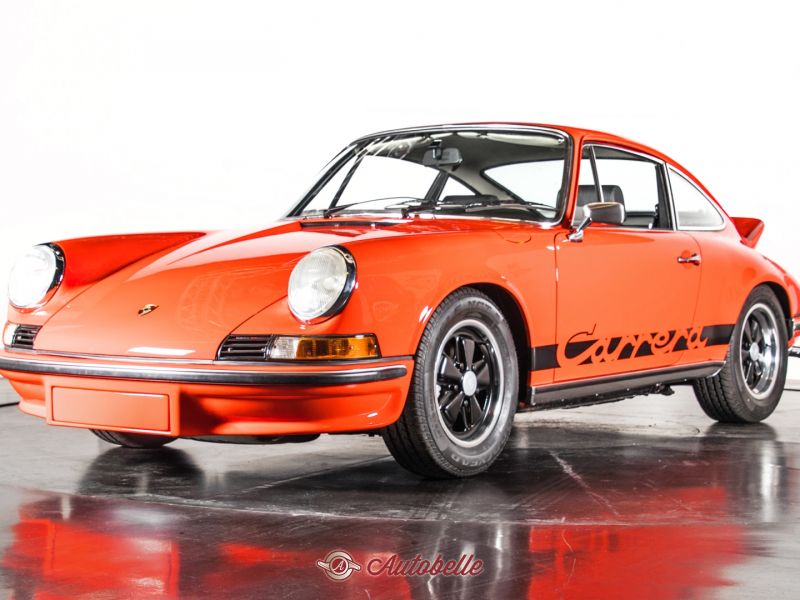 In 1973 Porsche built 1,580 Carrera RS 2.7, in Sport, Touring and Racing versions. The enthusiastic welcome given by fans to the new Carrera immediately put the Stuttgart company in serious embarrassment, which after only three months from the start of production, had already sold the first 500 units of the first series and also the second, was placed with the same ease as the first.
The RS 2.7 was considered a "Homologation Special", based on the 1973 2.4-liter 911S, which would later be used for the 1973 RSR 2.8, the 1974 RSR 3.0 and finally the 934 and 935 turbo.

The main distinguishing feature of the Carrera was the "duck tail" rear spoiler which allowed to increase top speed and, at the same time, reduce the tendency to oversteer at high speeds.
Even the graphics of the livery, captivating and certainly not devoid of grit, helped to enhance the overall chromatic contrast of this car, rightly considered the most coveted of the 70s, a true status symbol of the 70s and in those of to come.
The Carrera RS 2.7 formed the basis of a racing model, which would mark the history of motoring and achieve countless successes in the most important races in the world, in the decades to follow.

On 16/01/1972, the local Porsche Dealership delivered the new car to a well-known doctor of the city, who remained its owner until 1992, when the car was bought by the International Prestige of Montigny Les Metz.
The new owner immediately commissioned an expensive restoration to the Richard Alacaraz Automobiles workshop in Vandoeuvre - FR, as evidenced by the invoices issued on 30/12/1992. The mechanical part and the engine underwent a major overhaul including the replacement of numerous spare parts.
Between 2005 and 2007, numerous ordinary and extraordinary maintenance operations were carried out on the car by the Porsche point Service Nancy workshop in Vandoeuvre - FR. The original invoices of the time are available for consultation.
The car remained registered in France until 2007, when it was purchased by a well-known Belgian collector from Heule, a city in West Flanders and registered in Belgium, as per Certificate of Conformity no. 40386 of 17/12/2007, issued by the Federal Motorization of Brussels (documentation available).
Between 2007 and 2009, some ordinary and extraordinary maintenance was carried out on the car by the Belgian Autohandel DC workshop in Kortrijk, as evidenced by the processing invoices issued by the same workshop.
The car remained in Belgium until 2019, when it was purchased by Ruote da Sogno Srl. Current owner. Although in excellent condition, the car has undergone a thorough restyling by the best specialists of the Italian Motor Valley and nothing has been left out to bring the car back to optimal conditions.
The engine, already recently restored, has undergone a further overhaul and today is like new, without worn out parts.
The interiors, even if spartan, have been restored to new with the complete makeover of the leatherette and fabric seats by Medici Interior Classic Car of Reggio Emilia and today they are in excellent condition.
The dashboard, including the original instrument panel, is well preserved, fully functional and covered with the black leatherette of the house. The gear lever and knob are the original ones.
The road test of this Porsche Carrera RS 2.7 remains an exciting experience to be told.
The car is started without delay, the engine is "round" in revs and very responsive to accelerator stress. On the road, the ride is fluid and homogeneous and the braking is progressive and without anomalous blockages. The gearbox engagement is precise and without slipping, there is no noise from the differential and wheel bearings.
The suspension is correctly responsive to cornering loading, while the steering is precise and with excellent directionality.
The car, restored to the splendid new condition, is now ready to participate in Concours of Elegance and historical Races.

The car is on display at our showroom in Reggio Emilia, Italy.

WE EVALUATE EXCHANGES / BARTERS WITH VINTAGE CARS AND MOTORCYCLES.