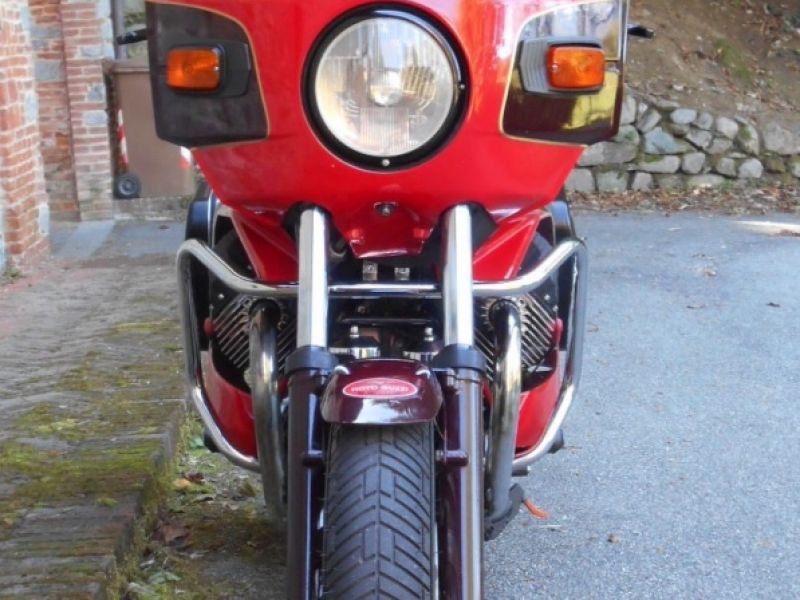 MOTO GUZZI 1000 SP II
Year 18/06/1985 (one of the most beautiful versions produced and sold for its chromaticity) when it was sold by the Official Moto Guzzi Dealer of Biella "Pozza Moto Srl" in Via Fratelli Rosselli, 74 in Biella (BI) , remained in the same family for 35 years, before passing as a collector. This is the reason for the very few kilometers traveled for a motorcycle of this level, devouring, grinding kilometers. The odometer shows 22,576 km. Original! 640 km. Routes annually, practically never used! This explains its impeccable state of conservation! Its original two-tone color "amaranth and red" is the element that distinguishes this model in particular, to which is added the chromatic contrast given by the engine and the chrome of the paramotor etc. … The bike is supplied with: original keys and double keys; Manual use and maintenance booklet; Workshop Manual: trousse with tools; Original bags. New tires (just fitted), the original ones although in excellent condition, have been replaced for safety. Held with scrupulous and meticulous care over all these years! Overhauled and serviced motorcycle. It is sold only to enthusiasts! Real vintage 80s cult object!

This vintage motorcycle can be registered and will participate in the event for the 100th anniversary of the “Moto Guzzi” history, on May 14, 2021; which will be held in Genoa on the centenary of its foundation, in memory of Giorgio Parodi, Genoese founder of the historic “Moto dell'Aquila”; important and exclusive event!


The Moto Guzzi 1000 SP was produced from 1977 to 1985. The SP 1000 was born with a dual objective to offer enthusiasts a bike that is able to face long journeys in the best possible way, able to ensure on the one hand a high cruising speed, from 'atro offering the public a real grand tourism capable of countering increasingly fierce competition. The 1000 SP owes its name to some stylistic innovations introduced such as the fairing and fairing that made it the cd. “Custom Series” compared to the previous 1000 G5 model. Since its inception, the 1000 SP has been designed and built using the wind tunnel for which Moto Guzzi had equipped itself during the fifties to better face motorcycle competitions. The 1000 SP is a generous motorcycle that is equipped with a beautiful twin-cylinder engine with Gilnisil cylinders (a Gilardoni brand, a company from Mandello del Lario, a supplier of cylinders), a galvanic coated silicon alloy that allowed greater durability and less degradation of the cylinder walls, in addition to allowing a coupling with more precision pistons. All this to the advantage of duration, silence and power, as well as ensuring lower oil consumption due to less leakage. The twin-cylinder of the 1000 SP is generous and reliable, with high torque output even at low revs. In two or alone, the 1000 SP is the ideal bike to spend a day relaxing on curves, back and up, in comfort and safety. The saddle is comfortable and the vibrations are almost zero, all to the advantage of comfort, safety and fun. The 1000 SP, despite a powerful engine, is a motorbike with a sweet and generous character, which can be easily driven and for this reason it is also suitable for motorcyclists of average experience, who seek freedom and relaxation when traveling by motorbike. Then followed by the SP II (1984), with the innovation of the square fins of the cylinders, in addition to the aesthetic variants such as new colors and new more modern front mudguard, new die-cast plates for the footboards but above all with the substantial technical modification of the front wheel. 16 ", to try to improve the handling of the vehicle. (modification also extended to the contemporary 850 T5 and Le Mans 1000). Another modification of some importance, designed to overcome the shortcomings found on the first series, was the displacement of the side stand from the front vertex of the monobloc to the left "underfoot", which was much appreciated by users, being able to now count on a really useful and stable accessory, like never before.