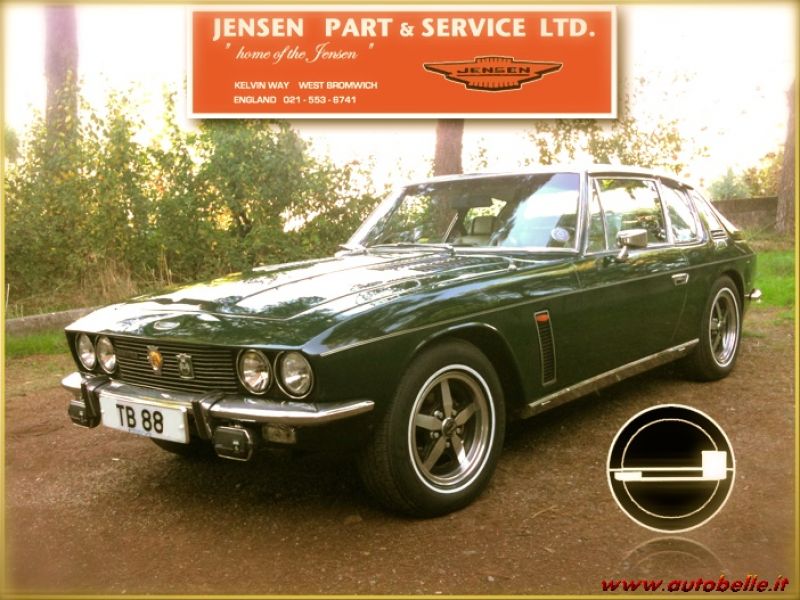 Jensen Interceptor III year 1973
here for salt: beautiful and rare Interceptor series 3, last series of the model presented in the distant 1966 in London in the salon of the automobile to Earls Court.
This sensational coupe' Gran Turismo and was a creation of Italian craftsmanship, Carrozzieria Vignale who designed the entire line and in the first year of production, provided the bodies already formed to english factory of Jensen near Birmingham and exactly in West Bromwich, while the mechanics was provided by American Chrysler and finally the whole was then civilized from the proverbial British care with the interior crowned by a triumph of skin Connolly and instrumentation of the Smiths.
This is a car of prestige that joins the Rolls, Bentley and Aston Martin and like them was built the whole by hand.
The car has the perfect engine, a "Chrysler Big Block Engine V8 7.2cc. powered by a carburetor quadricorpo of Edelbrok, the sound of this engine has a charm all of its own and run all its passage. The automatic gearbox is fitted as standard on all models Interceptor, is a Torqueflite that goes divinely, free from problems of every kind.
This rare car on the magazine "classic wheels" has a rating of 34mila euro while in England there is a merciless quest to acquisition by a craft factory that reconstructs with new systems of mechanical most modern, including an american engine the smallest, while maintaining the lines of this fabulous bodywork, for a resale at prices higher than 100,000 pounds to satisfy fans of classic vintage cars with good finance portfolios.
However the among the beauties of this car, there is the practicality of operation given by a mechanical mighty and generous and, as it says in the UK: "a-stressed engine, no high reving" i.e.: Engine not stressful, excellent performance not at high speed :-)
The price of the Jensen Interceptor Series3 and is aligned on E. 29,500.
I could accept an exchange in part with a Bentley Turbo R in very good condition.
The car in question has English documents for registration and is charged to the buyer.
You can contact me via email
thanks for having seen and read the announcement.

This advert has expired, it is no longer possible to contact the advertiser.