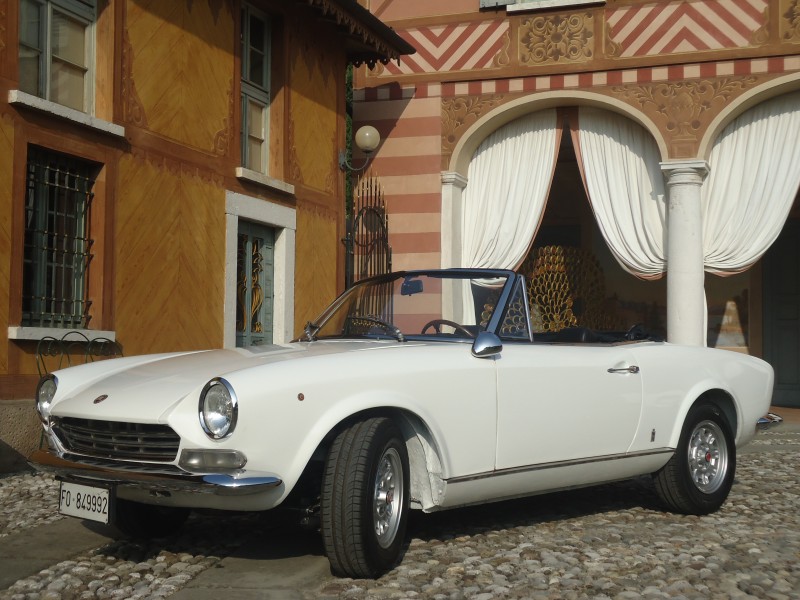 You Fiat 124 Sports Spider came done introduce dell to the Saloon?Automobile in Turin in November of 1966. Work of eclectic Tom Tjaarda designer, that has left each other, unfortunately, in June 2017, does the line take I sprout, particularly in the tail, from a?other car of Tom, the Chevrolet Corvette Swallow. The Fiat 124 Sports Spider came directly realized by the Pininfarina. The car that we propose Ã ¨ one of the first 1000 produced (loom 759) and Ã ¨ is admitted in January of 1967. Endowed with his/her original motor, (124ac000 nÂ°s 1023) therefore matching number, has avutol?last owner, from 1992. These, from good impassioned, it used her/it only to participate in the assemblies and him Ã ¨ taken care of of manternerla mechanically in order. In the last years Ã ¨ performs her/it revision of the motor (runs 17.000 km from the restauration), new friction, soft and new dampers, pneumatic new. The car Ã ¨ in fact pleasant and round nell?I use with the typical his/her sound of the bialbero Fiat 124. During the 2017, him Ã ¨ continued with a restauration type conservative, that has behaved, the substitution of the capottina (Ã ¨ foresees his you cover hood for when the car Ã opened ¨), restauration of the seats and police squad, sovratappeti in rubber new, you look for in light league new. E'infine treats with protection nanotecnologica for her body shop and cromature. Naturally Ã ¨ performs a cutting mechanic of preparation and debugging. you treats therefore of a ready and pleasant car, from power immediately to use and that surely Ã ¨ destined to be also a good person and alternative investment.