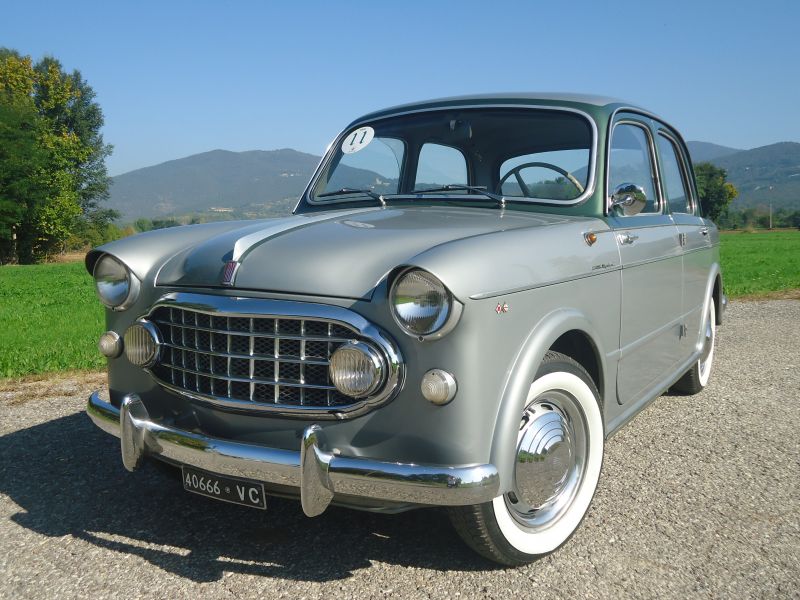 Vignale is ¨ one among the piiss important ¹ Italian carrozzieri. Defined €.l €.uomo that carved l €.acciaio € , its success is owed a lot Michelotti that collaboris² to the designer with him up to 1961. Appreciated by the clientele Vip that made him realize exemplary only of Ferrari, to the beginnings of the years €. 50, Vignale, allargis² the look toward the cars piis ¹ notes to the public to realize special and only versions in the style €.Vignale €. It was cosis ¬ that after l €.uscita of one of the cars, you destines to the middle class, the New Fiat 1100 103, also Vignale proposed sull €.allestimento derision, his/her proposal, that could not call other if not €.Elite € , that well it went to identify the target of the clientele to which this car was destined. Three series of Elite were realized a different for year: €. 55 €s. 56 and €. 57 (what in reality you/he/she was realized around new 103 D). Drawn therefore always dall €.inesauribile Michelotti, that we recognize for the particular (what a not is ¨ that of the TV, to intend us) back tail, the version €. 56 have some unique characteristics what: The anterior mascherone, important, with incorporated two lighthouses fendinebbia, that brings us to cars piis prestigious (Ferrari 212 Inter Vignale ndr) ¹.. The back tail with a wave above the line of the back fins that he/she remembers the forms of some American cars. The finishes in aluminum side specifications for the car. The back lunotto of great dimensions. In the vain trunk we find the spare wheel under the carpet and the bocchettone of the fuel not piis ¹ I express but all €.interno of the trunk. The back back refolds him to give great space in the case you/he/she had been had need to load particular objects. You says that Michelotti had thought about pictures or works d €.arte (ndr.) Naturally the livery of the bicolored metallizzatis personalized immediately these realizations separating her from the traditional cars of series. In this case, the first owner, was a textile entrepreneur of Connecting rod (then doing part of the province of Vercelli), that wanted to distinguish with an agile but only car in his/her kind to 35, note €.d €.Elite €.
Antifurto Bloster dell €.epoca, predisposed for connection it reloads cellular e/o navigator. The car is ¨ is always maintained in operation is ¨ endowed with pomp of the electric gasoline and is ¨ in order with the periodic revision up to January 2020. Change and friction new. Any noise of suspensions, differenziale € ¦ One show! Not is ¨ a TV, but being one 103 of the 1956 puis² to aspire to be enrolled to the Thousand Miles Historical. The numbers of production of this Elite don't be known Vignale. What we know is ¨ that you can hardly find un €.altra of it, to an assembly as this. A car for many, but not for tutti € ¦ Note €.d €.Elite €.